We worked on a tangible proof of concept and a follow-up big-scale industrial IoT solution with KYOTO for over two years. See how we engaged in a fascinating project from the sustainable energy industry.

Table of contents
Estimate your project!

What made the Order Group team fly to Oslo to meet in person and discuss the new project every two weeks? In other words, what was so exciting about Kyotopia? Learn about the history, course, and results of the project in the renewable energy industry, which has been evolving over the last few years.

KYOTO is a start-up from Norway whose founder, during his stay in Kenya, had the opportunity to work on solutions for obtaining solar energy. It was then that he got really hooked on it. He dreamt of redesigning the way people plan and build new settlements. At the heart of this vision was the CSP (Concentrated Solar Panel) plant, a self-sufficient source around which you can build the residential, industrial, and service district.

When he got back to Norway, the concept had already been ready in his head. So he decided to follow his gut and establish a start-up that provides RES infrastructure. Over time, the start-up's focus evolved towards energy in general, with a focus on decarbonizing the market as well as energy storage and trade. Today, the Kyoto Group deals with developing solutions to store and manage the abundant energy from RES and applies it to make the world a greener place.

Kyotopia - the concept and success story in a nutshell

The initial idea was to produce cheap and efficient solar power plants. In order to be able to start the production and the regular operation of a start-up in general, funds were needed. So the Kyotopia project was at first aimed at creating an MVP to test the idea and attract investors.

During the design of the MVP, the original concept changed - ultimately the goal was to create an energy storage system. But most importantly, it worked! Based on the created prototype, the project got funding and went public on the EURONEXT market. Equity from four private placements (Q2 2021) equaled... NOK 183.3 million.

But let's now tell you about the whole path to this success. 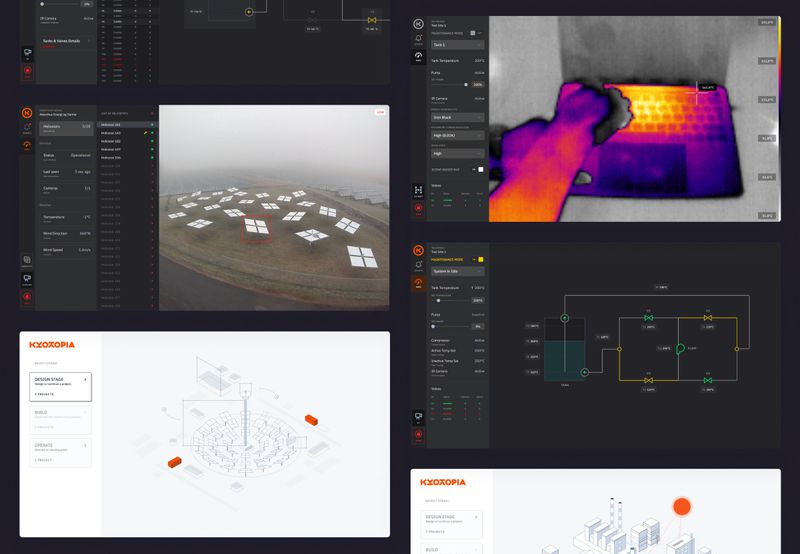 The project started in October 2019. In the initial phase, it concerned only the UX/UI of the MVP. In the beginning, the project definitely required our physical presence. Every two weeks, we flew to Oslo to finish the sprint and plan the next one. This travel and direct cooperation were necessary - the project involved handling of physical elements, the big-scale hardware. The physical parts were to be controlled through the web interface. So it was essential to see what it looked like, touch it, and see how it worked. Thanks to this, we could really feel it.

We started by following the original concept of the start-up, which was designing the CSP plant.

We started from the interface, where we had a map on which users could check any place on earth for its RES potential. The system verified whether building a CSP plant is profitable there - all based on data. Then the start-up was also supposed to build the power plant itself.

Software, hardware, firmware plus logistics - in the original Kyotopia concept, something was to be physically built and put to function. That required ordering parts, conveying some tests, and managing the whole process.

The gradual evolution of the concept was pretty dynamic.

Over time, the project transformed - research showed that the business should not focus on the power plant itself, this concept is already out in the world and is subsidized. Thermal energy storage appeared to be a much better idea. Especially with a market's growing need to manage excess or shortage of energy.

Hence, the project ultimately concerned a liquid salt reservoir connected to both a conventional and renewable source - a battery. But not only the battery itself, but also its management system - BMS (Battery Management System), which consisted of the complex SCADA module monitoring and managing the flow of warmed-up liquid through the pipe from the energy source to storage

Functionalities that we implemented in the system

Our ultimate task was to create a functioning BMS based on SCADA technology - a complete industrial IoT solution. We worked on it in an international team that included companies representing various approaches, industries, and environments.

Here are some of the functionalities we implemented:

What did our workflow look like? Fast as a roller coaster, exciting, and engaging as in Verne's novels or cutting-edge science fiction. So let's explain how it exactly went.

This is not a start-up that builds something in a garage. KYOTO's end product, the battery, is a container-sized installation. Therefore, many actors worked on the solution, and all of them were managed by our client's partner company, which introduced Agile to the teams of Kyotopians and consequently kept it going.

Our team jumped into a well-thought-out process and adapted to it. We cooperated with specialists from other countries. Each of them had their narrow field, and we meandered between them. We started planning with the big room goals. Then we split it into desired milestones. Thanks to this broader perspective, we knew how to manage tasks for shorter periods and the sprints themselves.

What did we learn?

Thanks to working in SCRUM and Agile on this project, we learned:

The main challenges in the project were its scale and duration. Additionally, huge assumptions, many processes to control, changing teams, and evolution of the initial idea. The project started in October 2019 and lasted over three years. And yet it worked!

The BMS designed by us is an interactive panel that enables the user to control each phase of the flow of the liquid agent through the system of pipes and valves to the tank in real-time. We were responsible for designing all aspects of the final solution - from the engineering, software, and UX side.

Thanks to the creation of a promising MVP, and efficient work on the concept and implementation, investors quickly became interested in Kyotopia.

Based on our work and the prototype we built the project got funded and went public on the EURONEXT market. Equity from four private placements (Q2 2021) reached NOK 183.3 million.

We feel great satisfaction that our work could contribute to this success.

If you are up for the next exciting article, go to the blog or case studies.