Due to a widespread adaptation to remote working, hiring a software company from a nearby country has become a popular strategy. However, making such cooperation perfectly efficient still remains a challenge for many. But, as a Polish software company with a long track record of projects for Norwegian, UK and German companies, we believe we have it figured out.

Here’s our guide on how to establish a perfect nearshoring partnership.

Why do companies consider nearshoring for software development?

It’s not a secret or a surprise to anyone that the most common reason for nearshoring is lower cost.

Choosing a highly-rated software development company from their own country is simply out of the budget for many startups. However, in recent years, many companies realized that cheaper agencies from Central and Eastern Europe could offer the same, or often an even higher level of service than household software houses. According to a skill-based study by HackerRank, Poland holds 3rd place only after China and Russia. As a result, the decision for nearshoring turned from being a financial one to strategy-motivated. In many cases, a nearshoring agency turns out to be simply the most qualified in terms of specific technology and experience.

Another crucial reason why nearshoring strategy in software development is so viable is that the language of software is universal.

We’re talking about both fluency in English and programming languages. In our team, every single developer and designer can fluently communicate with all stakeholders. It allows them to perfectly understand the vision of the project and work according to its principles. And if there’s a need, a client can directly talk with anyone in the project.

The communication aspect, along with working in the same time zone and cultural closeness, is the biggest advantage of nearshoring compared to offshoring (hiring from another continent). Of course, that option is cheaper, but the difference in processes and the lack of common understanding in working with companies from outside of Europe often results in software that’s far from what was initially imagined.

Lastly, in some cases, searching for a nearshore team is the only option from a scheduling standpoint. In Norway, for example, every management-level contract has a 3-month minimum notice period. Therefore, when time-to-market plays a significant role and there are no available specialists, looking for a nearshore agency is the only way to go.

To jump-start the partnership, let’s jump on a plane first

The first thing we always try to do in nearshore partnerships is to meet our clients on both a professional and personal level. It’s possible to arrange such meetings remotely, but only to some degree. Spending just a couple of hours on a plane is absolutely worth it. We’re not here to judge, but some people spend that much time driving to work every day.

The truth is, nothing can replace a face-to-face meeting, during which both teams can discuss the project, exchange ideas, and make sure they’re the right business partners for each other. It can involve a series of workshops and, of course, less formal late evening meetings in a local restaurant—all in a good spirit of culture- and team building. 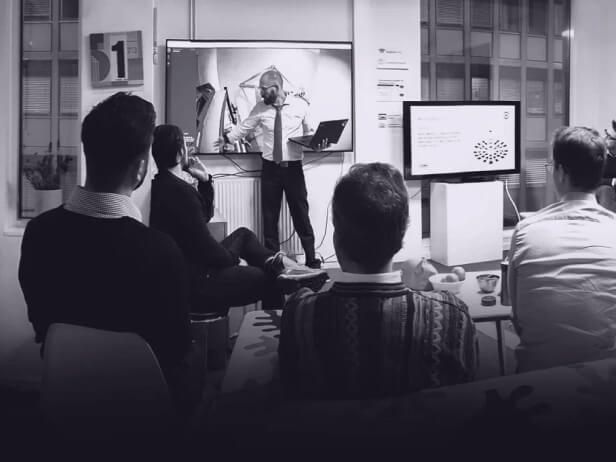 A great example of that is our partnership with Kyoto, a Norway-based company that looked for a software partner for their MVP. Right from the start, we arranged a 2-week workshop in Oslo, during which we were supposed to meet each other, talk about the project, establish workflow, and set the next steps.

During those two weeks, we’ve shown that we have a lot to offer for the project, we’re able to develop it efficiently, and we know how to make it better. From the other perspective, they’ve confirmed that we’re the perfect team to execute their project, and there’s no need to look further. It immediately clicked on a technical and personal level.

Of course, it’s entirely possible that during such a meeting one of the teams will realize that the partnership might simply not work for whatever reason. It’s much better to learn that now than two months into the development process, and it’s easier to find that out during an actual meeting.

The initial meeting shouldn’t be just a one-off. In every project, some phases require brainstorming, a quick back and forth, and simultaneous cooperation between many people. Nearshoring allows teams to make a quick decision - let’s not waste any time, book the first flight tomorrow and deal with the process efficiently. During our project with Kyoto, we’ve decided to spend the last three days of the first sprint in Oslo, working on-site with our client, presenting our progress, and planning the next phase. We’ve repeated it several times during the project. Thanks to those meetings, we’ve been able to continually deliver results in line with the project’s initial vision.

Being a real part of a project is the key

Perhaps many agencies wouldn’t be so keen to admit that, but it’s true that a feeling of connection to the project and the people involved in it brings out the best in developers. Knowing each other only on the basis of formal calls and emails cannot build that degree of involvement. The geographical closeness and the ability to meet for workshops or even crunch, if necessary, are invaluable for the process. Thanks to those meetings, we’re becoming one team with a common goal. It draws an extra level of effort and responsibility in every member of the project.

The World has gotten smaller

In the last few years, nearshoring has become a go-to strategy for many corporations and founders for all the reasons mentioned in this article. At this point, 60% of our partnerships are in this model.

Maybe the best software company for your project is a few borders (or a couple of thousand kilometers) away from you? And with the right approach, this distance can play no role whatsoever.

So if you’re looking for a European team of experts in IoT, Python, React Native, with extensive experience in MVP-building, we’re here for you. Let’s discuss your project. Or even better, let’s meet face to face.

Are you looking for IT experts for your project?
Let's talk about your product. Contact us!
Apply now!

How to sell your idea to investors? Guide to startup pitch decks

How to secure your startup funding? Best practices for entrepreneurs