Best Web Frameworks and Languages To Use in 2022

2021 kept us in suspense until the very end. There was jostling for attention among the most popular technologies, programming languages, and frameworks. Who maintained the position, and who had to yield? Learn, what are the top programming languages to build applications in 2022 to stay up to date.

2021 kept us in suspense until the very end. There was jostling for attention among the most popular technologies, programming languages, and frameworks. Who maintained the position, and who had to yield? Learn, what are the top programming languages to build applications in 2022 to stay up to date.

We have looked at the 5 Top Tech Trends for 2022, and now we will delve into the future of programming languages and frameworks that are to be popular this year.

The presented selection is based on Stack Overflow's 2021 Developer Survey and our own observations and predictions. 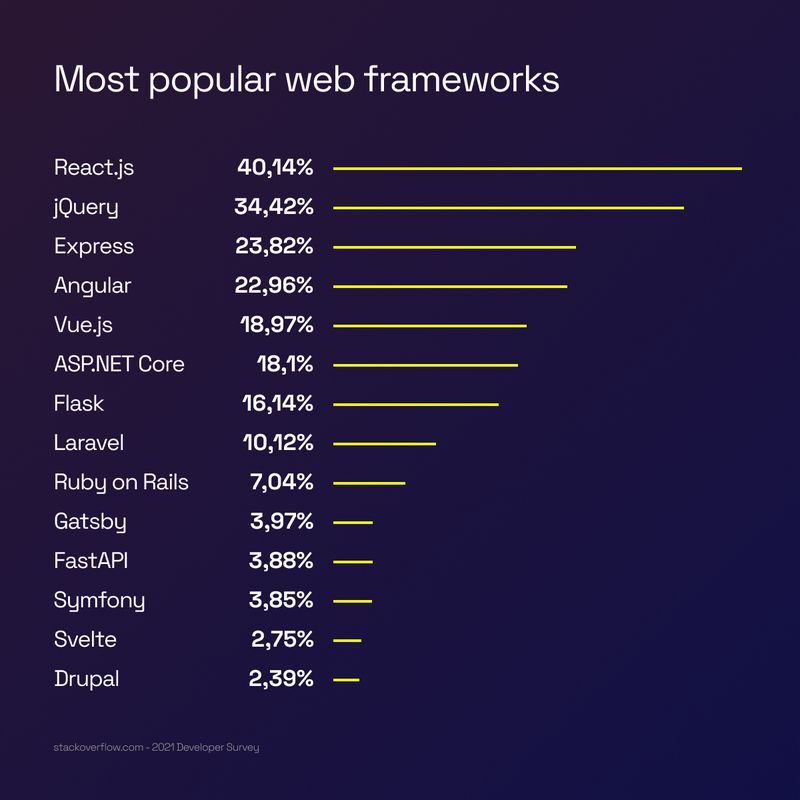 Just behind unfading Javascript and SQL, Python at the edge of 2021 was claimed by the Stack Overflow community as the 3rd most popular technology, becoming automatically the 1st most trending programming language. It is also the most desired-to-learn for those who aren't using it yet - the fifth year in a row! To what Python owes its success?

Python is a leading software-building object-oriented language. Although it represents high complexity and is flexible enough to be used for various designs, its syntax remains easy to learn. Furthermore, its library and interpreter are open-source and available to anybody, contributing to the growing user community. The other reason Python is a craved programming language is no compilation step. The fast edit-test-debug cycle is super quick, making Python extraordinarily effective and user-friendly. Developers simply love it, and they still will in 2022.

Top apps made with Python

Python is past its 30th birthday, so it’s a great moment to celebrate and give some examples of how great it may be. So let’s list the TOP 3 famous use cases.

Above 40% of surveyed professional developers code at least some of their projects in Python. The language develops and attracts more and more professionals. Thanks to this, when choosing Python, you can be sure that the project’s maintenance and scaling will always be possible and easy to implement.

Need to get something coded in Python? It's one of the technologies we specialize in. Check out our custom development options.

Node.js maintains its position as one of the most popular technologies

Node.js moved to the 6th position on the list of the most popular technologies for 2022. Neither a programming language nor a framework, Node.js is simply a free and open-source cross-platform runtime environment for executing JavaScript code server-side that is built on Chrome’s V8 JavaScript engine. You can think of Node.js as a handy and efficient tool to compile JS code to a much faster one.

What is Node.js good for?

Node.js is designed for building scalable and fast network applications. But it can surely do more. The scope ranges from designing browser games to chat rooms and collecting data. Node.js is very efficient and in multi-user real-time data cases. With a rising need to process more data here and now, Node.js will probably continue to thrive in 2022.

So which popular apps are powered by Node.js? There are quite a few, but we will present two strong examples. 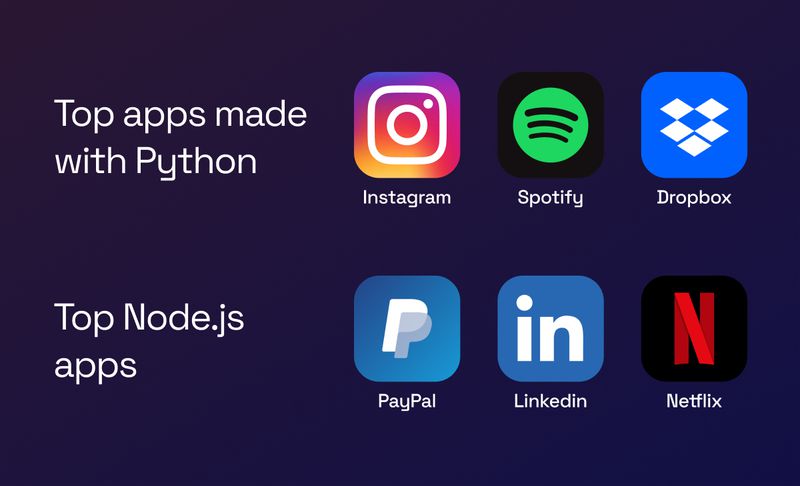 React.js on the top with Django and Flask catching up - most wanted web frameworks

Web app development trends are constantly changing. In 2021, React.js surpassed jQuery as the most commonly used web framework. Both Django and Flask, although they went a few places down the ladder to the top, are constantly dear to the developers. Those who coded in Django or Flask in 2021 want to continue to do so in the following year.

Let's take a closer look at each of these frameworks.

Used by 41,4% of surveyed professional developers, React.js has been ranking high for years now. What is more, it expands its sphere of influence to the developers who used to code with Angular or Express, to name a few.

But what exactly is React.js? It's an open-source JS library for User Interface design. Anything that needs to be interacted with to use a website or app can be built with React.js, making it a crucial technology for any user-friendly software project.

Used by 13% of surveyed professional developers, Django is a Python web framework made for really special tasks. Like building a customizable app or a social media website. It also provides a production-ready interface for editing and managing content on a website. Sort of "drag, drop & tweak" for developers. Easy as it is, it still has many applications and a strong community that shares libraries and provides support. To be maximally agile and providing, the Django framework uses:

Flask has a similar number of users as Django - around 14% of surveyed professional developers. This Python web microframework doesn't require any external libraries and supports API. Much younger than Django, Flask has already collected a bunch of true and loyal fans. For example, it has been used to build and develop the Netflix app and Reddit.

A glimpse into the… past. Why some technologies don’t make it to the future?

Remember when it was just Java and the C++ family? Not anymore. With over 45% of surveyed professional developers using Java in 2018, we welcome 2022 with only 34,5%. JS seems to be the only evergreen and steadily growing programming language.

It is even more dynamic with frameworks. Let’s look at ASP.NET and its way from one of the rather popular frameworks with around 27% of loyal professional developers to the least wanted technology that made it to the list in 2021. Why? The law of succession. The heir of the ASP.NET followers is ASP.NET Core - a new, upgraded cross-platform version with powerful cloud support. So there is a great abundance of frameworks to choose from - some old solutions die naturally, some evolve. And this is why the attention has been diverted.

Another thing is good practices and examples of tech giants who use specific technologies. Without a good patron - a well-known company or application that would use a given technology - it can be challenging for a language or framework to maintain popularity. Learn more about the benefits of using a popular tech stack from our article: Python, JavaScript, React? Why should you consider using a popular tech stack?

That was our New Year's article on the forecasts for the top programming languages ​​in 2022. So let's see what this year will bring and whether the trends we see so clearly today will persist in the coming quarters. These are ultra-interesting times for technology!

Why taking responsibility in a team is gold? Listen to Bartek, our Python developer

Python vs JavaScript vs React? Why should you consider using a popular tech stack?