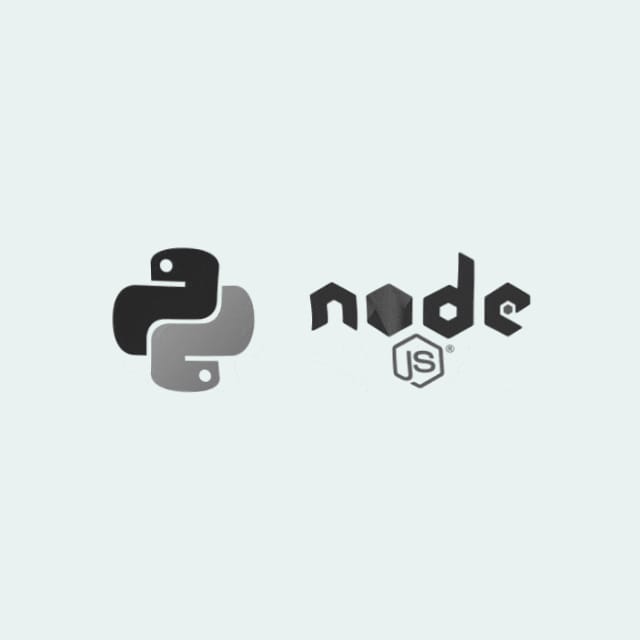 Node.js vs. Python Comparison - Which Technology Should I Choose?

You are making a business decision about what software technologies to adopt for your projects. Both of these languages feature in technical discussions, but low-level coding assessment may not be your forte. So what features, benefits and drawbacks of each should you take into account?

Which one makes the most sense for building successful systems – and what are the ongoing maintenance considerations that will live on long after the project has been signed off?

Node.js traces its roots through JavaScript's history. Created in 1995, JavaScript is a hugely popular first choice for front-end web development. It's the only language that runs in client-side browsers and is an excellent programming language for that purpose. Node.js is an open source JavaScript runtime environment introduced in 2009 that enables JavaScript to also run on the server side. It runs on Chrome's V8 JavaScript engine, built in the efficient C++, and provides the APIs necessary for backend development. In its early years, Node.js was not considered to be a severe back-end development contender, but maturity has brought enthusiastic acceptance.

Python is a high-level programming language used mostly for building applications, automation, machine learning, data science, and web development. It was designed to force excellent readability in its code with plenty of white space. Python has been around since 1991 and has built a strong and loyal following. It's fast to develop in, reasonably easy to learn and uses fewer lines of code than other languages. A vast code library offers shortcuts for application development.

Both are used for back-end functionality, while Node.js has the added advantage that JavaScript was built for front-end presentation in the first place.

What are the latest trends in using the two languages?

The relatively explosive popularity of Node.js has seen it become the first choice server-side framework, surpassing Ruby and Django. No doubt this is based on JavaScript's existing popularity, to begin with, but emphasizes its credibility as a true back-end tool.

Python has surged in popularity, driven to a large extent by the massive growth in Data Science as a discipline. This analyzes the vast quantities of data being harvested nowadays to extract the gold dust of insights that steer everything from marketing to new product development. Data Science and the financial industry use algorithms and scientific techniques for which Python is especially suitable. Its record in web development is also a significant growth driver.

What kind of projects do they fit best?

Let’s compare the pros and cons of both:

- low latency real-time apps, and is scalable, lightweight and efficient.

- Not great for CPU intensive applications

- Easily understood by non-Python programmers, so easy and cheap to maintain

- Not as fast to execute as Node.js

- Not dependable for time-critical real-time applications

This is just a short list of sample projects that demonstrate the application areas chosen by the developers for each of the languages.

PayPal – They rewrote the bulk of this sensitive web application in Node.js in half the time it would have taken in Java, HTML, CSS, etc. If nothing else, this demonstrates the credibility of the new technology. PayPal now utilizes full stack engineering whereby developers create both the front and back ends in Node.js.

LinkedIn - Scalability and fast execution times drove LinkedIn’s decision to switch back-end processes for mobiles almost entirely to Node.js. The results have seen the number of servers required shrink from 15 to 4 while doubling the user capacity. The mobile app also works more than twice as fast now.

Netflix – Switched to Node.js because of its scalability when they encountered issues with their existing framework. Significant factors in the decision were also its fast execution speed and how quickly existing JS developers were able to learn Node.js.

Clear AirSpace - A substitute for Boeing's Jeppesen Aviator, an auxiliary navigation aid used by pilots, running on Windows and IoS devices. Rich all-inclusive functionality makes it a Swiss Army knife for pilots. Python and Django were chosen for the back end because of the extremely tight deadline of just three months to deliver a Most Viable Product (MVP). Functionality presents the optimum flight path between two points allowing for hazards and obstacles spread across three dimensions.

Google – In the pre-V8 days, Google deployed Python as its preferred development language as developers found it easier to learn and use than Java. Rapid project development and easy maintenance were also factors. Bash and Perl scripts were routinely translated into Python, and it became the de-facto server-side language.

Spotify – Python is/was used in a vast number of back-end processes as well as data analysis and was chosen primarily for speed of development. Analytics is massive at Spotify for learning user preferences and making suggestions. Python's renowned capability in this area nowadays makes it a first choice in Data Sciences too.

Conclusion – which is best for what types of application?

Both will deliver for the majority of general commercial application development. However, Python’s strengths lie mainly at the back end while Node.js benefits from being suited to both front and back-end applications with established front-end superiority.

Without a doubt, Python is the choice for applications that utilize scientific algorithms and data-intensive applications such as analytics and has a low ongoing maintenance profile because it is so easy to comprehend and learn. Significantly, very many Python libraries can be invoked for specialized functionality as required to speed application development.

Your decision may be different whether you are choosing the basis for single application development or if you are planning the foundation technology for a startup, for example. It is a judgment call best made on a case by case basis.