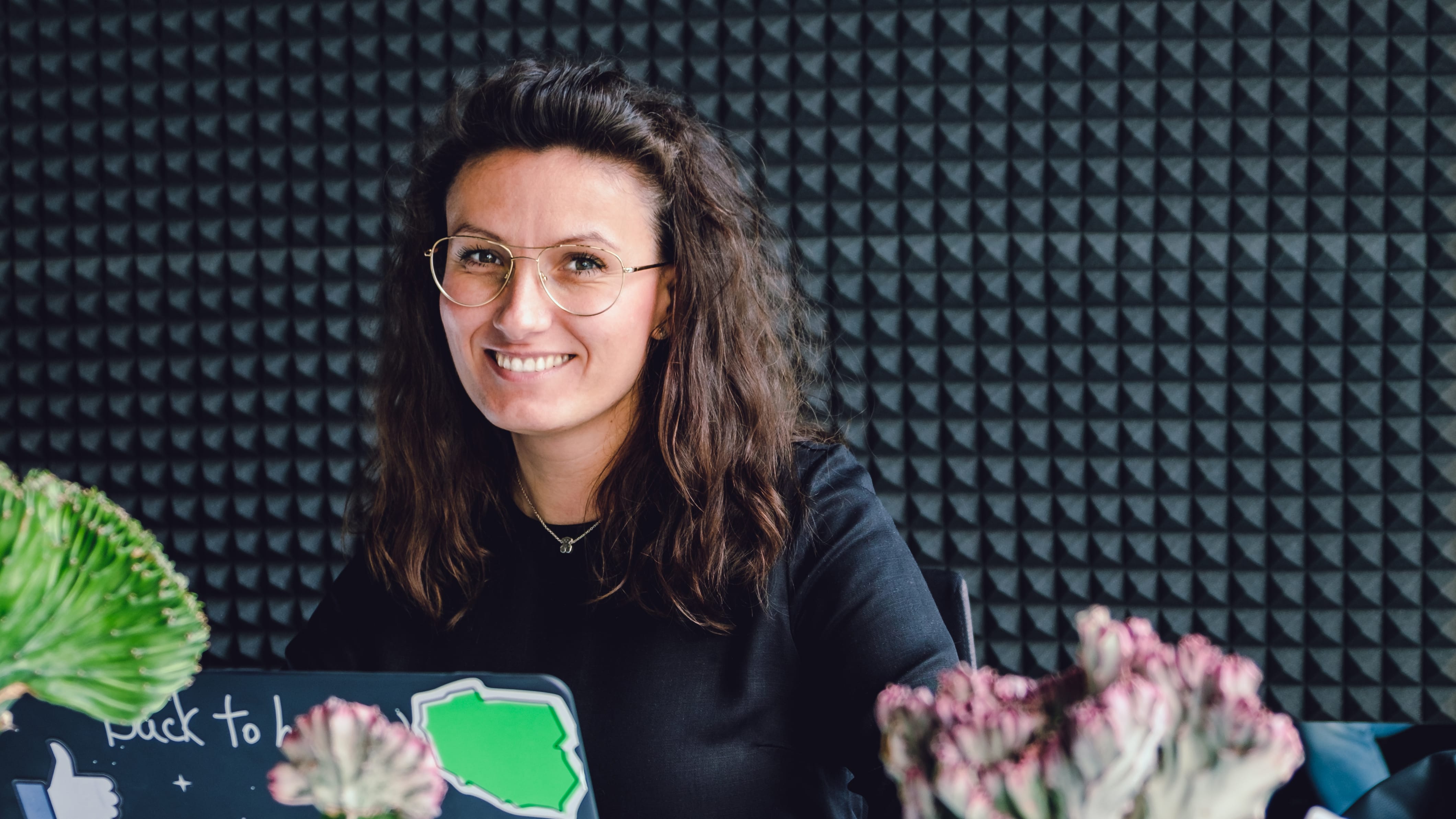 Meet Angelika, Head of People at Order Group. Joining our team was an excellent experiment for her, an experienced corporate IT HR MANAGER The move seemed a little bit risky, but after almost two years with us, she has no doubt it was the right choice. As for OG, hiring her turned out to be a real game-changer.

However, it wasn't easy. Read Angelika's story to find out how "XD" and "YOLO" could be misunderstood if you come from a stiff corporate world.

"I came here by accident. Looking back it was the best accident that happened in my career", says Angelika, Head of People at Order Group. She's been working with us just for 20 months and changed both her life and the company. She joined us after a successful career in top IT corporations. Her first days weren't carefree before she transformed OG into a modern organization with an inclusive culture, where chill and passion are the most important values.

"I've never expected to work in a small company. I've always been working in big corporations, where I was responsible for human resources. At the beginning of my career, I worked with big telecoms - Play, and Polkomtel, the owner of Plus brand", says Angelika. Both companies are among the top mobile phone network operators in Poland.

Next, she moved to Samsung to manage research and development IT structures. "The goal was to create an HR Business Partner role in the organization, who would assist the managers in HR-related tasks."

Angelika went for a change, and for the first time, she took a project of building HR structures from scratch in MSLGROUP Poland, a PR company. She managed to do it, but it was an exhausting experience, and she decided she needed a break to focus on her family. "I was burned out. I worked 12-13 hours a day, and I needed to take a break and relax,", recalls Angelika.

During that time, Angelika's old friend called her. When she told him she was having a career break, he said he knew this guy Filip, a co-founder of a software agency Order Group, who was looking for an experienced HR manager to help his company grow from a small startup created by a group of friends to a scalable company.

"I didn't know the company at all. We were introduced by e-mail. I wasn't very enthusiastic, but I was looking forward to returning to the IT sector, and I decided to give it a try,", recalls Angelika.

She had three interviews that day, and OG was the second one. "My dress code was completely out of place. I arrived at the meeting wearing clothes I used to wear working for corporations, and as you can imagine it didn't go with the tech startup style", laughs Angelika. It clicked between the OG founders and her immediately. Within an hours after the meeting, she received the job offer. She took it.

However, the first days at work weren't carefree. She fit the company's needs perfectly, but the cultural differences were drastic. "16 people were working at OG at the time. For the first few days, each time I came back home, I told my husband it was an interesting offer, but I can't do it. I couldn't even compare the experience with any other company I had worked for before,", says Angelika. "His answer was always the same - give it a try, and you can quit anytime."

There was another surprise waiting for her. "I asked about the essential elements of the HR structure, and the answer to each question was, 'we don't do it.' It was a complete greenfield, and this started to be exciting".

At the time, Order Group had no formal HR processes.

The cultural differences were difficult to overcome. "I was the oldest in the company. Before I had been rather younger than older in each organization, I worked for. Now I became a dinosaur", laughs Angelika. "I didn't understand the slang and memes. They kept on sending me 'XD' on Telegram. I googled it, and it said 'sth so absurd that's funny,' so I thought they were mocking me, each time I got this message. Only later did I realize it's just another excellent way to smile".

The guys at the Order Group had no official processes. "When I asked Filip how a process worked, he answered that the rule is YOLO," recalls Angelika, who was forced to do another anxious urban dictionary search... "Fortunately, I quickly became friends with graphic designer Paulina, who explained to me all the lingo and introduced me to the others."

Angie - the soul of our team

Now Order Group is much different. After one year and eight months, we have recruitment processes compatible with the dynamic IT job market, wage grid, and development paths. All the key HR functions are implemented and structured.

Every six months, Order Group managers do an evaluation with in-depth feedback from at least one or two people. We talk about how to adjust the long term goals of the employees and the organization, so they are compatible.

We have set employee engagement as one of the highest priority objectives for the company. We organize integration events, parties, and work retreats to get to know better. Finally, we also hired a second recruitment specialist who helps Angelika.

Each day Angelika works closely with the OG founders to keep up a friendly working environment, where everyone is comfortable and is free to act. "I want everyone to feel empowered to have an individual impact on the projects she or he is working on. It's important to me that everybody has an opportunity to express their opinion. It works with these values we created a close team, where we like working together", explains Angelika. "It's not easy to build and sustain such a culture, but I'm convinced it's worth the effort."

We also moved to a new, spacious office. One more significant change - Angelika was only the third woman in the organization, but now 30% of the Order Group team is female. "I consider it as my personal success. It's a great challenge to create a gender balance in an IT team. I hope that there will be more female engineers available in the job market. So far, there are still fewer women among software developers, and it's difficult to recruit them."

When Angelika came, Order Group was a group of friends - geeks who were able to do some excellent projects together. They didn't see that this kind of structure won't scale up.

Now we are a modern company with a unique inclusive culture.

"At first it wasn't easy for newcomers to get involved, and Filip, who is a very kind guy, but with the personality of an engineer, didn't even notice the problem. My job is to make sure everyone is comfortable. It's great satisfaction when I can see how fast we are growing, and what I managed to do in just less than two years. I get positive feedback from the team who say; they don't imagine this company without me".

We can grow to keep the chilling and family ambiance. All thanks to Angelika:

"They call me mama Angie, and I couldn't care less about my age, as at this stage of my career, I found a place where I could perfectly balance life and work. It's a perfect place to match my professional ambitions with parenthood, and still be able to realize passions, such as traveling. The team stays young, as the average age is about 30. For a long time, I was the oldest member of the team. My ambition was to hire somebody older than me that would even fit the XD culture. I've done it this month. We've just hired the first employee that was born before me. Everything's possible in OG".

Are you looking for a place where you can find your work-life balance?
Join our team
Show more
Services
Case studies
Technologies
[] - dupa
Blog